You are here: Home / death / A Sorta Eulogy

I am an orphan in fact now, not by design, though I was that as well. My mother died Friday evening. Hazel Elaine Smith (Ewing), 90 years old, who said a year ago she hoped she’d fall asleep and never wake up and was ticked as the dickens when the sun rose on a new day. Then she fainted and slipped away. I hadn’t seen her in over 30 years.

In childhood, Mom lived with her family in the mountains, where they skied to school. The eldest of the four siblings and the only girl she fished, hiked, finished high school and went off to Northwest Christian University where she met and married my Dad. I was a honeymoon baby.

I see these pictures and remember the warm, affectionate, cuddly Mom I had the first four years of my life. Snuggles in the rocker on the wrap around front porch watching fireflies. Giggles being tickled on the way to bed. Pet puppies and rabbits, lemonade and sprinklers. I loved her with wild abandon. I loved her with little girl dependence and conversely saucy assurance.

In her idealism, and the first known deviant behavior of Dad, they adopted three girls who were biological sisters aged 3, 4, and 12. Later we would learn why he insisted on Michelle (12). Mom embraced them all. The realignment of our family shook me to my core, for overnight I was one of five siblings vying

for my mother’s love and affection and it was stretched very thin. Dad began his grooming of Michelle. Mom was too busy to notice.

We moved from Indiana where Dad got his master’s degree, to Idaho and my parents took in three grieving cousins our age, whose mother died in childbirth. Now there were eight children. I couldn’t tell you up from down, so topsy-turvy was our life. Dad was the principal of our grade school, drove a school bus, preached on the weekends, and milked cows morning and night to feed our family. He was also molesting my oldest sister (not pictured below). 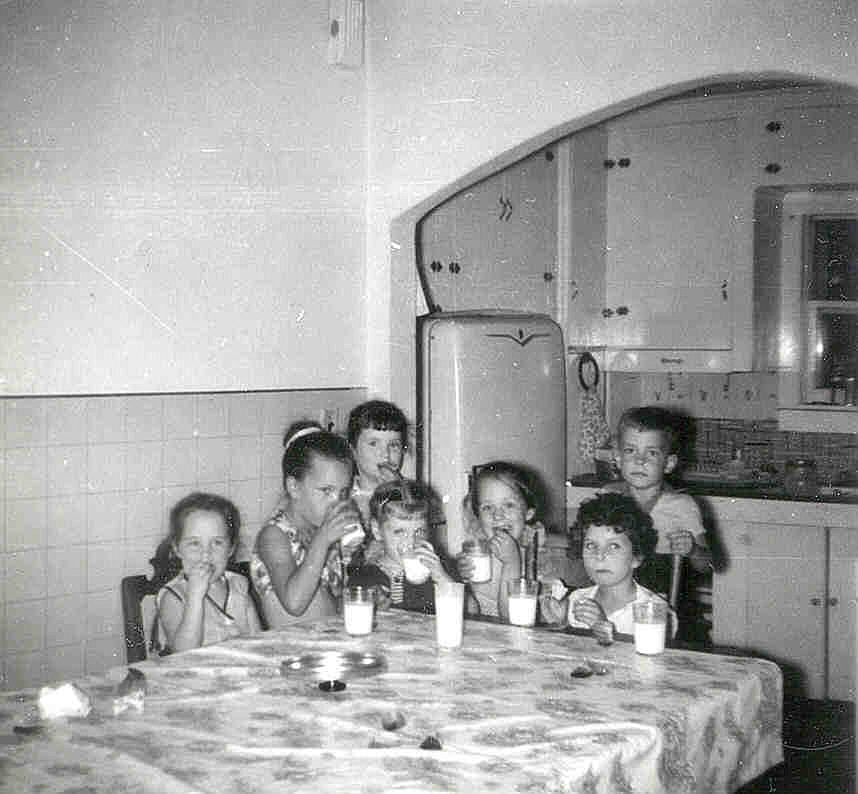 Then there were nine, for Mom gave birth to Carly, and we moved to Oregon. It was there that Dad’s proclivities caught up with him. I’m certain Mom was overwhelmed with the sheer number of bodies to care for. I drifted like swirling leaves buffeted by all those winds of change. The cousins left, and Dad got Michelle pregnant.

This was the first betrayal of epic proportions rendered in my book The Fifth Sister. We moved to Africa, a dream of my mother’s born out of her idealism, and his need to avoid exposure. There she sustained another devastating blow. He molested my sister Katie. Seismic cataclysm. Mom made a torturously difficult decision to leave him and asked the mission board to bring her and her children home. They refused. In truth, I don’t know if she would have been able to leave. She would have talked herself out of it, such was her obsession. But, she didn’t need to decide, that was done for her by the board. Mom took her first steps to the dark side, the last bit of hope rinsed from her heart.

She became my father’s accomplice.

Holy cow, was she good at it. Dad gave her numerous occasions to master her craft. Honed to scalpel precision, she removed threat after threat. It didn’t matter what happened to any victim as long as Dad was spared exposure. I know of three girls she had committed to a psych ward without their permission or that of their family, by stealth. This rendered them unreliable witnesses should any of them come forward.

When, at long last, I blew the whistle, she took me on. They both did. They gave ‘breaking Laura’ everything they had. Their narrative about me removed me from my community, church, and family. They colluded with my ex to take my children from me. They underestimated my Mama Bear instincts, a gene that went missing in Mom. Did you know I’m in their will? Why, yes, I am! This addition occurred after my whistleblowing, for the only way they could make themselves look good was for me to be mentally ill. Therefore, I am now included for inpatient psychiatric treatment. Well that, and the disbursement of one dollar. Michelle and I get a dollar.

But their words to me and about me shattered me, blew a cannonball sized hole through my heart. Mom rejected me openly the moment I was willing to out Dad. Truth is, she rejected me long before that, I just didn’t get it. Today as I look back, I marvel at the strength it took, the wisdom I didn’t know I had, the strategic planning, the small circle of advocates, the agony of the need to do any of what I had to do to protect my children and extricate myself. It was another season of prolonged trauma.

Trust me. A mother’s rejection is worse than her death.

And yet, she’s gone. And with that any sliver, atom, or neuron of hope to hear, “I love you.” I didn’t realize my inner child was holding onto that one until she died. Or for her to affirm my right to be me, for I was unacceptable to her as I am.

Maybe she’s shed darkness. Maybe she is riding her Palomino horse, Honey. Maybe she’s putting up preserves with Grandma, and playing Pinochle with her brothers, who all preceded her in death. Maybe she and Granddad are polishing rocks. Or maybe … she’s with Dad.

I don’t know what to do with who they were in life, or what their hereafter might look like. I do know that after I had given the reality of her death time to settle in me, I breathed freer. I no longer have to worry about what Mom might try next. And maybe…just maybe she sees clearly now.

Because of what she did to me, and didn’t do for me, I am who I am. I like me, battle scarred though I be. More, I have a deep sense of purpose in speaking truth, giving voice to others, and always this message of hope. If I can do it, so can you.