You are here: Home / Child Sexual Abuse / The Whistleblower 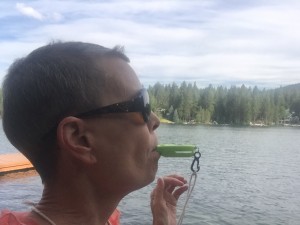 Whistle-blower: Someone who reveals something covert, or informs against someone.

I don’t care for the implications of the synonyms: snitch, squealer, tattler, tattletale and other less flattering words. But there you have it according to Merriam Webster. When I was young, I started a dictionary according to Laura. In it were neologisms – words like: fantabulous, bass-ackwards, nummy-duff (yogurt, according to my infant daughter) be-lax (relax), be-post (a recent entry, meaning ‘supposed’ courtesy of my grandson). So, I’m going to give two nuances to the term “whistleblower” – according to me.

Whistle blowing saved my skin last week. I have a hunter’s whistle I put around my neck, when I take to the river at sunrise. Forgive me for another paddleboard story. I promise to tie this up with a bow.

There are three older gentlemen who like their early morning, calm water ski run. We’ve become waving buddies over the last three years. One drives the boat, presumably looking forward scanning for river safety, who waves energetically when a fellow water lover is seen, one is a “spotter” who focuses on the skier and signals the driver when a skier is “down” and one crisscrosses the wake ruffling the mirror smooth surface. I encounter them twice each day – once as they ski downriver, and again when they return.

This day, I’m returning downriver in solitude when I hear, before I see, a ski boat. Driver, spotter, wakeboarder. They speed into the bend of the river and take a 90° turn to come into the narrows. No problem. I’m paddling along the right shore, they’ll head upriver on the left. Only they don’t. The young driver is twisted around in his seat observing a slim blond girl wakeboard.

His lack of attention to the wheel sets their boat on a 45° angle putting them in a direct collision path with me across the river. I expect the driver will correct his course, only no one in the boat is facing forward. At those speeds, things happen pretty fast. I grasp my whistle and put all the lungpower a singer has into a long piercing blast, and prepare to dive.

Both the driver and wakeboarder startle visibly. The driver turns around, shocked to see me, and whips the wheel sharply to the right. The wakeboarder goes airborne over the wake. Battling a wall of water generated by the boat, I drop to my hands and knees on my board as the blond sails right past me. No, they didn’t bother to come see if I was okay. I was. Nothing like an adrenalin rush! But my whistleblowing saved me.

Nuance number two of the dictionary according to Laura’s definition: In the narrowest sense of the definition the following applies, but I take issue with the pejorative synonyms. I was the family’s whistleblower (they would say black sheep). I took a stand on behalf of my children in the face of the family secret. I said out loud, in the presence of others, that my father molested children. (Snitch? Squealer?) I said that my mother further victimized my sisters by blaming them. (Tattletale?) Yes, I revealed something covert, child molestation. Yes, I informed against someone. But why would the undercurrent to doing so be deleterious? When did truth telling become dishonorable? How will we stop this epidemic against children if we don’t face facts?

Join me. Be a whistleblower on behalf of children. Please?